It should have been a proud moment for Castleford Tigers players and supporters to celebrate the club reaching the Challenge Cup final after defeating the Widnes Vikings 28-6. Instead it turned into a disgraceful scene that Rugby League should be thoroughly embarrassed about.

After the full time siren, and as Castoeford players thanks their supporters, some Widnes supporters invaded the pitch and ran towards the other end of the field, trying to bait Castleford fans.

A lot of video footage has been uploaded of this incident. Here are some of the video and pictures posted in tweets from the game:

This is video shot from the Widnes end. You can see how some of the trouble escalated very quickly:

This is video of the incident from the Castleford end of the ground:

Video of a Castleford supporter running onto the pitch to punch a Widnes supporter:

Here is a picture of the Castleford Tigers mascot being knocked to the ground by pitch invaders:

Here is a picture from The Daily Mail showing the Castleford Tigers mascot chasing after his head as its kicked by a Widnes supporter: 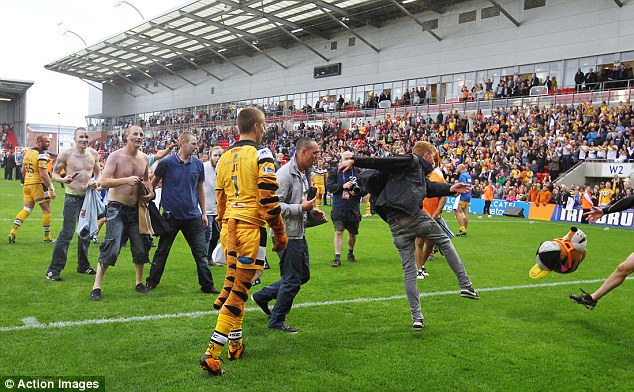 Another picture of the pitch invasion:

The RFL has released this statement on their web site:

Following the incident involving some spectators at the end of the Tetley’s Challenge Cup semi-final at Leigh Sports Village between Castleford Tigers and Widnes Vikings, the RFL will await reports from the stadium, the police and the two clubs before deciding what action to take.

The behaviour of the vast majority of fans was exemplary and the incident was not what is expected from Rugby League supporters. This should not detract from two very successful semi-finals.

RFL Chief Executive Nigel Wood said: “The sport has every right to be disappointed with the behaviour of a minority of Widnes fans. We will work with the clubs to identify any supporters who encroached onto the pitch. There is no place for such behaviour in Rugby League.

“True Rugby League supporters are renowned for their good nature at all occasions such as this and we will not hesitate to use whatever measures are available to us to protect these precious values.”

Obviously all of this is disgusting behaviour that has no place in the game.

I think for the most part, Castleford supporters showed a lot of restraint when faced by Widnes supporters who had run 120+ meters to confront them the way they did.

There has been more video and pictures uploaded of this incident, but a lot of it is also being taken down as people don’t want to get drawn into what is a serious incident. I have also avoided posting some of the very clear images of people involved as I think it should be up to the RFL and Police to identify them.

I think the RFL should ban Widnes from participating in the Challenge Cup for five years because of this. The penalty for this type of behaviour needs to be very harsh so it doesn’t happen again.

Too many times we are seeing crowd behaviour issues in England. It needs to stop. It isn’t a one off. We can’t just keep saying its a minority of supporters. The entire game needs to take responsibility for scenes like this and make sure they never happen again.