A few days ago ESPN decided it would suspend Dan Le Batard for paying for these billboards to be posted around Akron, Ohio, home of former Miami Heat player LeBron James: 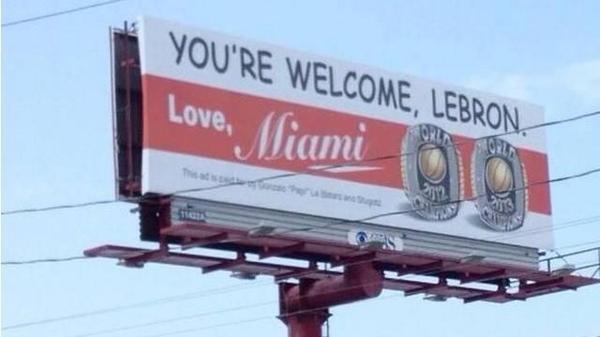 While it is only a two day suspension most feel that it is an overreaction by ESPN for something that was obviously done in good humour.

The suspension caught the eye of comedian Daniel Tosh who tweeted:

sorry to hear about your suspension, @lebatardshow. DM me your salary and i will happily cover your lost wages. #comicsans

Never one to miss a moment, Le Batard replied with this:

@danieltosh I earn 691 million dollars a week. That is what prorated over two days? You can afford to have someone calculate it. Thanks

It was a great reply!

This suspension is ridiculous. Its sport for crying out loud. I’m sure even LeBron James had to smile when he saw those billboards.

Anyway, this is one of Le Batard’s finest moments. Check it out: