Australia has completely dominated New Zealand at Old Trafford and reclaimed the Rugby League World Cup by a score line of 34-2.

The Kangaroo’s were at their clinical best throughout the match. From the very first minute their brutal defense put the Kiwi’s under pressure and they didn’t let up until the final siren sounded.

The game didn’t start off all that well for New Zealand with winger Roger Tuivasa-Sheck leaving the field in the early minutes with a leg injury. It put the Kiwi’s on the back foot straight away in terms of their bench rotation.

Australia got themselves on the board early with a gift penalty goal from just about in front. That was matched in the 16th minute by New Zealand with a penalty goal of their own.

New Zealand had came out of the gates playing physical football but they were no match for an Australian defense that was on a completely different level. It wasn’t just the crushing hits that were impressive, the numbers Australia were getting into tackles really shut down the New Zealand attack. On top of that, there were always Australian defenders sweating on a Kiwi offload.

The opening 20 minutes was tough, and as New Zealand broke into their bench rotation a little earlier than Australia, the game started to change a little.

Billy Slater scored for his first try of the match in the 19th minute. The conversion gave Australia and 8-2 lead, and you got the feeling New Zealand needed to hit back fairly quickly. 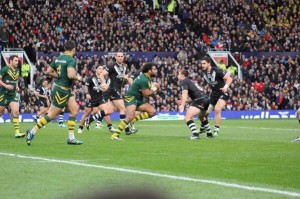 While New Zealands pure go forward was good, it was more than matched by Australia. As the game wore on though Australia’s defense started to frustrate New Zealand. This ended up putting a lot of pressure on the Kiwi’s kicking game. From there, it just got more and more difficult for New Zealand.

A break down the left hand side of the field and a clever kick in field by Darius Boyd saw Cooper Cronk score Australai’s second try in the 31st minute. It was a real blow to the Kiwi’s who were start to lose touch. The conversion gave Australia a 14-2 lead, a lead they would add to in the 36th minute with another Johnathan Thurston penalty goal.

In the first half Australia’s kicking game was just about perfect. Cameron Smith, Cooper Cronk and Johnathan Thurston make sure Australia dominated field position and kept New Zealand under pressure at the end of every set. New Zealand fullback Kevin Locke played great, was never caught out of position, and was just about the Kiwi’s best on the night. He didn’t get much room to work in but all of his work was very good.

New Zealand kicking game through Shaun Johnson was patchy at best. The Kiwi’s were always kicking out of less than ideal field position and Johnson was under pressure for every single kick. The result saw Australia under a lot less pressure at the back and gave them just enough space to start their sets of six off on the front foot.

The second half started off disastrously for New Zealand with the Kangaroo’s carving them up out wide leading to Billy Slater’s second try in just the 42nd minute. The conversion gave Australia a 22-2 lead, and this game was threatening to become embarrassing for the Kiwi’s.

While New Zealand never stopped trying hard, they simply couldn’t crack the incredible Australian defense. Australia gave them nothing and eventually it started to take its toll.

Australia crossed the New Zealand line once again in the 52nd minute with a length of the field effort that started with a great offload, then a clever kicked by Jarryd Hayne. Morris swooped in for an amazing try but things turned very scary as Morris flew off the end of the pitch and into the advertising signage at the end of the ground. It took Morris a few minute to recover, and he didn’t leave the game. It wouldn’t be the last time the extremely small in goals and ditch at the end of the pitch would come into play though. The conversion gave Australia a 28-2 lead and the game was all but decided.

A high kick to the edge by New Zealand saw Manu Vatuvei fly through the air, miss the ball and his the advertising signage on the full. His arm actually slid under the signage and once again it looked like he had picked up a horrible injury. Luckily he was able to shake it off as well.

Morris added a second try to his tally in the 72nd minute. The conversion by Johnathan Thurston took the score line to 34-2, and that is the way the game would end.

One of the big talking points going into this game was not only the fitness of Billy Slater, but the fact that Slater was looking to redeem his performance in the 2008 World Cup. Slater delivered! He was brilliant under the high ball and dangerous in attack. It was a great game for Slater and one that he really needed to overcome his past demons.

Sonny Bill Williams had a game he would like to forget. His contribution to the game was minimal at best. The Australian defense completely shut him down from the first minute until the last. The only two significant offloads he had in the match both went to Jarryd Hayne. Williams played terrible in the World Cup final. This will be a performance that will haunt him for the rest of his career.

For New Zealand, Issac Luke was good early on as was Keiran Foran. The problem was the Australian defense strangled the New Zealand attack for the entire game. The effort was there but there wasn’t much the Kiwi’s could do in the face of a suffocating Green and Gold wall of defenders.

The crowd of 74,468 witnessed an amazing performance by Australia. The Kangaroo’s avenged their loss in the 2008 final in spectacular fashion.

Throughout the World Cup Australia only allowed 6 points in total to be scored against them. They didn’t allow another try after their opening game against England.

When you look at the final result you have to commend Tim Sheens. He had this Kangaroo’s side playing their best football when it really mattered, in the final. He rotated his squad during the tournament very well and didn’t allow the side to become complacent even as they steamrolled teams in the later staged of the tournament.

So, Australia and once again the Rugby League World Champions. As an Australian I am really happy right now!

While the 2008 World Cup was a very special moment to witness, it burned me that Australia did not hold the World Cup.

This win allows players like Johnathan Thurston, Billy Slater, Cameron Smith, Greg Inglis and Cooper Cronk to be able to say they have won every major tournament the game had on offer. It completes their careers.

As for New Zealand, I believe they have far more depth in talent than they had even back in 2008. They will get better. Today was just one of those games in which Australia were simply unbeatable. When the Kangaroo’s are in that type of mood there isn’t much any team can really do.

I’ve really enjoyed the 2013 Rugby League World Cup and obviously I love the final result. Australia are the best Rugby League team in the world once again. You have to love that!!!