Sam Tomkins Fined For Urinating In Public On The Gold Coast

News Limited is reporting that English Rugby League fullback Sam Tomkins was caught urinating in public at 5am on Sunday morning. He was given a $100 on the spot fine by Police and the New Zealand Warriors have also fined him NZ$2,000.

It’s not the crime of the century, but it is unfortunate. It is also Tomkins first taste of the spotlight that Rugby League players are under in Australia and New Zealand.

I reckon there are a whole lot of things you could get away with at 5am on a Sunday morning on the Gold Coast. Tomkins is pretty unlucky in that sense. In the grand scheme of things taking a piss isn’t the worst thing in the world.

I remember a number of years ago Willie Mason was caught draining the main vein in public. People still point to that as some huge disgraceful moment in his career. Personally, as long as he isn’t pissing on anything of mine, I don’t really care at all.

This will probably make Tomkins have a think about things though. He will now realise that even at 5am on a Sunday morning he will be getting attention. This isn’t a small competition in Northern England he is playing in, he is a high profile athlete in a huge competition that is under intense media focus every single day.

I’ve been really impressed with how Tomkins has handled himself so far this year. He has had every reason to make excuses for himself.

He joined a poorly performing team, his coach was sacked just a matter of weeks into the season, and his performances have been a little bit up and down for a player on his salary. He keeps pushing ahead though. He makes no excuses. He isn’t shying away from the areas of his game that need improvement and he isn’t worried to try and take control of the game for the Warriors when he sees fit.

I’ve always put a lot of scrutiny on Tomkins game and that makes a lot of people think I don’t like him. Nothing could be further from the truth. I watch his games for the Warriors hoping he does well. I get concerned he will get injured when some of the giants in the NRL get a hold of him. I really want him to do well, I want him to continue to develop and become a star in the NRL.

Having a leak in public at 5am, damn. It’s a shame. I just hope that supporters of the game don’t overreact and crucify the young bloke for doing something that probably happened thousands of time on the Gold Coast on Sunday morning. 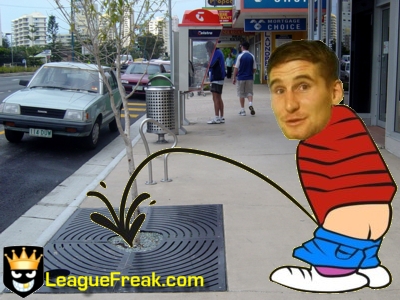 James Tedesco Made The Right Decision To Join The Canberra Raiders Would Wayne Bennett Return To The St George/Illawarra Dragons For The Right Price?