You couldn’t make it up. I have become the obsession of an English journo called Nigel.

After the Melbourne Storms second trial game of the season against the Leeds Rhino’s I have not been all that surprised to see the angry, upset reaction from the English.

With ego’s battered, the insults started flying from northern England as they looked to take out their frustration on anyone they deemed to represent those terrible Australian’s that had shattered their tiny little world. With their idols deposed of in humiliating fashion, strait off the plane in a hit and run mission, many turned their hatred towards me.

Now, if your’re a long time fan of my Gloriousness, you’ll know that I love this shit! I think it is hilarious. Sure I am not a Melbourne Storm fan, but I am the biggest personality in British Rugby League even though I’m not even in Great Britain!

So after Leeds lost yet another World Club Challenge (They have lost more WCC games than any other club!), my old friend Nigel Wiskar decided to target me once again in a personal attack, like it is my fault the Rhinos can’t beat a team with jet lag that has only played one trial game since their Grand Final success last October!

In the article titled Melbourne Storm beat Leeds Rhinos in the World Club Challenge as Jamie Peacock rolls back the years Nigel wrote once again that he agree’d with me. That the Sky Sports UK commentary team was bloody atrocious. He then got upset when I pointed out the bleeding obvious, that Kevin Sinfield was hopeless, a non factor in this game.

Nigel reached for what has now become a mythical moments when the Storm, apparent, had someone wear a marker in training that was meant to represent Kevin Sinfield. The idea is that they has to do special defensive drills to stop Sinfield from doing….what ever it is he does when he isn’t kicking goals.

I like to think the Storm simply realized that they only had top focus on 12 of the Leeds players because Kevin Sinfield was simply so ineffective in attack that they didn’t even have to worry about him!

Now keep in mind, none of that is my fault. I’m not a Melbourne Storm supporter. I’m not a Leeds Rhino’s fan. I didn’t play make believe that Kevin Sinfield was the best player in the world only to see him once again wilt under the spotlight of an opposition that is world class, if a little under done.

Still, it was enough for Nigel to decide he would go out of his way and call me named!

Now Nigel, and I know you’re reading this buddy, believe it or not, I have feelings too. Sure those feelings are mostly ones of triumph, but still, didn’t you consider how your hard words might have effected me? Or is that affected? I can never remember…

Anyway, after reading what you wrote about me…I was upset. I actually went back to bed and took hold of the one thing that gives me comfort… 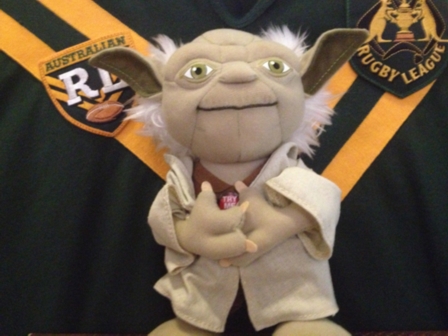 I’ll have a VB Nigel…cold if that’s OK!