If you are one of the people that manages to watch what The Footy Show consists of these days you will know that this year Beau Ryan takes the piss out of Jamie Soward with a segment called “Jamie Soward TV”.

Basically it is flogging an old joke.

Beau Ryan dresses up like Jamie Soward in a Penrith Panthers, he puts on headgear, they put two bushy eyebrows on him and then use a camera effect. Unlike other piss takes Beau Ryan has done on other players though, they make Soward look like a giant sook about everything.

You can see it here, it starts at the 50 second mark:

Last night on Channel 9 news Danny Weidler asked Jamie Soward about it. Soward obviously wasn’t impressed with it and didn’t really have much to say about it. He asked Weidler if Beau Ryan was even playing this season and basically said that when he comes back he will be playing in the NSW Cup rather than the NRL.

Weidler than asked Soward if Beau Ryan’s antics gave him motivation, to which Soward responded that if he needs motivation from Beau Ryan he should give footy away.

It wasn’t much of anything really, and while I did think that Soward probably should lighten up a little, he does come off pretty bad with the way he is portrayed. 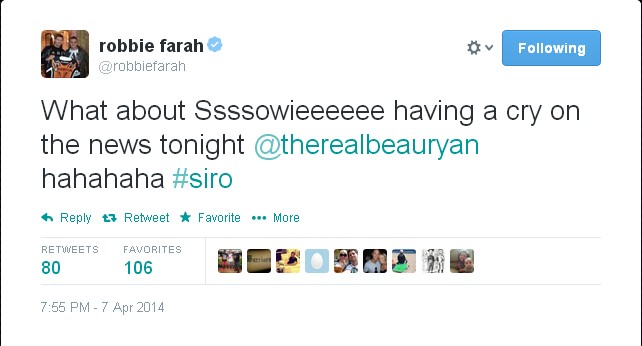 I sat back and watched Twitter descend into a shit storm as people attacked Jamie Soward, Beau Ryan, Robbie Farah and The Footy Show for various reasons.

Soward was being called a sook and a whinger. By even mentioning the piss take Beau Ryan had been doing this year, Soward basically opened the floodgates for people to have a go at him so meme’s started popping up all over Twitter.

Robbie Farah was being called a hypocrite after he had a go at Soward. After all, Farah himself hasn’t reacted all that well to some of the stuff Beau Ryan has done on The Footy Show.

Beau Ryan was being called an unfunny hack, and a bully, who was using his position on a TV show to attack players.

The world had gone mad…

As usual, Rugby League supporters over reacted. They took a tiny little shred of something and turned it into the worlds greatest disaster in a matter of minutes.

These are a bunch of grown men. They are all highly paid football players that can all look after themselves.

In doing what he does, Beau Ryan know’s exactly what he will cop in return. When Ryan takes the piss out of a player he knows that one day that player will get a chance to get their hands on him on the football field, and he know he has to cop what ever blow back there is.

I don’t really know what Robbie Farah was thinking by diving into all of this, but hey, he did it! If that’s how he feels fair enough!

I thought the people saying Jamie Soward was being bullied were off their rockers. Please, step into the real world for five minutes! I am sure Jamie Soward would be the very first person to tell everyone not to worry about him!

Rugby League fans really need to settle down a little bit if you ask me. They are far too reactionary, they turn non events into the biggest thing in the world, they take everything to the extreme and they turn players into caricatures of who they really are.

Footy players, for the most part, are just normal people doing a very extraordinary job. They live a strange lifestyle that sets their entire week out around the kickoff time for football games.

They sleep strange hours, they travel a lot, they are very well paid, they can rarely go anywhere without someone knowing who they are…its a weird lifestyle for a bunch of people that are just like you and me.

From a 60 second joke on The Footy Show to a few comments to Danny Weidler, this whole situation saw twitter explode. It was crazy!

Jamie Soward, Beau Ryan and Robbie Farah don’t need to settle down, you lot do!