After the Parramatta Eels fantastic win over the Sydney Roosters last weekend the Eels celebrated by holding the Jack Gibson Cup high. It was a great moment for the club who haven’t had much to cheer about in recent years. There was only one problem…they hadn’t actually won the trophy!

News Limited is reporting that the Sydney Roosters have contacted the Parramatta Eels and requested the trophy be returned to them as they have won the two game series on aggregate by a scoreline of 68-18.

Its hard to argue with that!

This all reminds me of the famous New Zealand tour of Great Britain in 2002.

New Zealand turned up in Great Britain as holders of the Baskerville Shield. They won the first test against Great Britain 30-16 and in the second match came away with a 14-all draw. The Kiwi’s then lost the third match 10-16 and we saw some hysterical scenes as Great Britain celebrated the series with this famous moment that I captured in a Motivational Poster many years ago: 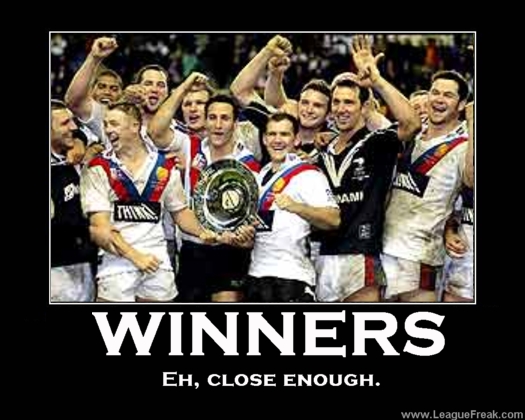 New Zealand were the holders of the trophy. The series was a draw. New Zealand had won the series on aggregate scoreline…there was absolutely no way at all you could have dressed this moment up as a win for Great Britain. Still…look at them! Hilarious!

So hopefully the Eels do return the trophy. They don’t want to be a laughing stock like the Poms were in 2002!

Anthony Griffin Wants The Game To End As Soon As The Siren Sounds Boxing Manager Admits To Fixing Fights, Including A Mike Tyson Fight