You know who doesn’t get belted by ground security at Super League games? People that are behaving themselves.

There is a rapidly growing problem within British Rugby League. Crowd behaviour issues are becoming more and more common. Almost every club has had to deal with some sort of off field issue caused by their own fans over the last couple of years.

Every time there is a problem with poor crowd behaviour in the game I put forward that clubs should be heavily fined for a first offence, a bigger fine for a second offence, and the loss of competition points for a third offence. All of these would kick in if an incident had occurred within a five year time frame.

The argument against these measures is that the club should not be held responsible for it’s fans. People make the crazy claim that trouble makers will go out and buy jerseys of other teams and try to get them in trouble. A claim that I think is bordering of absurd!

Fans need to know there are consequences for their actions.

People that cause problems at games are morons to begin with. You can’t reason with someone that thinks it is OK to throw objects at people or run onto the field and confront players. 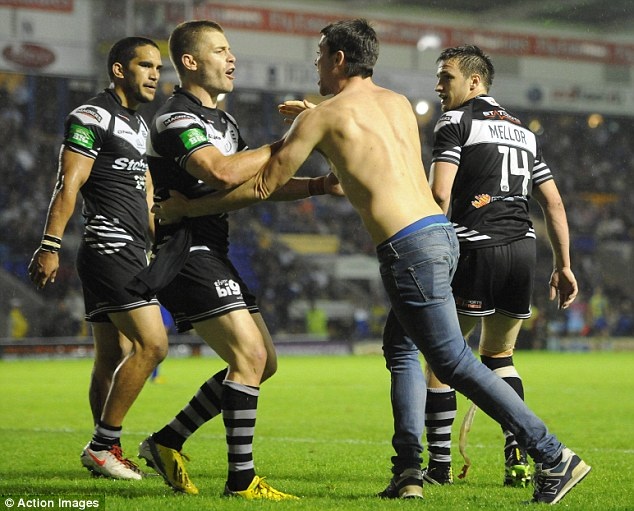 Penalties for poor crowd behaviour need to address this natural reaction. Supporters of all clubs need to have an “Us vs Them” attitude between normal fans that turn up to support their club, and the trouble makers that are invading our game as a growing rate.

How do you make that happen?

You put in place consequences for clubs. You make supporters accountable. You make a fan base self regulate with the knowledge that if they don’t, they will effect their club on and off the field.

If supporters know that some idiot among them is starting to be an issue and that if they are not pulled into line they could cost the club competition points, fans will go to ground security earlier and get these people removed from the stadium.

The problem is that people are still unwilling to form the connection between a club and it’s fan base. They are willing to celebrate and commiserate with the team when they win or lose, but they won’t accept that the team on the field is effected by the supporter base as well.

If a club breaks the salary cap, they get penalised. That effects everyone, from players, to supporters. Why? Because a club is a club, from top to bottom. With that in mind doesn’t it seem reasonable that poor behaviour by a fan base should also effect the entire club?

The alternative to all of this is that we sit back, do nothing and keep pretending that families will go to Rugby League matches. That this poor crowd behaviour doesn’t effect the entire game at all levels. We can pretend that sponsors aren’t watching, that parents aren’t questioning if their children should play and watch this game, and that broadcasters aren’t questioning the direction of a sport that doesn’t do anything when people are running onto the field.

It’s not good enough for supporters to point the finger at ground security. Do you think security staff want to be dealing with drunken, out of control idiots? Isn’t it more likely that security would rather not have to deal with any problems and go home having not copped abuse or injury from some moron that couldn’t control themselves because of numbers on a score board?

If you get dragged kicking and screaming from your seat at a game, I have no sympathy at all for you. The fact is that security does not target people who are behaving themselves. When people complain they were targeted by security, they are always, without fail, the same type of people. Every single time! The sort of people that believe police because they keep booking them for speeding. The same moronic mindset. Unable to take responsibility for the situation they have out themselves in.

The Rugby Football League needs to do something now. They need to start slamming clubs for the good of the greater game. These crowd issues and becoming more and more common. Something needs to be done now!

As Rugby League fans we sometimes look down our noses at other sports and the off field issues they face. That’s can’t happen any more. Rugby League has a problem. Unless something is done to fix things, we are just as bad as every other sport that we condemn for poor crowd behaviour.