NSW State of Origin captain Paul Gallen received criticism from Phil Gould and everything would be great if the criticism hasn’t been on a personal level says Cronulla coach Shane Flanagan. Microgaming Tribune reported this first where Cronulla was reported to believe that Paul Gallen, the Blues skipper, deserves a game three farewell.

This criticism has been the result of another Origin series loss and former NSW coach Gould took the chance to take aim at Gallen saying that the Blues skipper is “selfish”. Gould has continued to call for the veteran skipper to step down from Origin III, as he believes his shelf life has passed.

Flanagan has been defending Gallen saying that the latest critique coming from Penrith supremo Gould has been unwarranted. The Sharks mentor thinks that all of those comments have reached a personal level and believes that Gal has been playing really well. He doesn’t want to judge him and believes that Gal deserved his spot in Origin I and II.

Furthermore, Flanagan says Gal was man of the match in the Test match so according to him those comments are pretty unfair. They wouldn’t pick him if he wasn’t ready to play. He believes that Gallen’s form will show if he should be picked for the Origin III game. 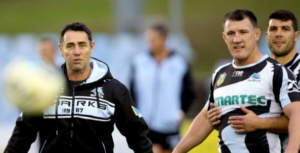 Gould continues to call for Gallen to be excluded after he did the same for the last two series, and Flanagan says he wouldn’t talk with Gould about those comments. He says he doesn’t intend to go down that path because it’s not worthwhile. He says that Gould has earned his rights to make comments, but he doesn’t agree because Gal’s form speaks for itself.

The Blues hierarchy and fans were urged by Flanagan to look at another series loss with some perspective. He says that they need to stop eating themselves and that they should applaud the Queensland side. He says it’s hard for him to say that, but they are just too good as they are a quality side. He further says that there is a lot of speculation as to who should be in and who should be out, but even if they picked another side, the result would be the same.

Laurie Daley, the Blues coach, has already said that despite calls for players to be blooded in the dead rubber match, representative retirement-bound Paul Gallen will be starting game three in Sydney next month. This means that Gallen will be missing for the Sharks’ round 18 NRL clash with Penrith, but Flanagan says that doesn’t worry him. He says that he likes to see Gal going out in his last origin since he has been a great NSW servant. The pride and passion that he displayed in that NSW jersey has earned him that.

Newcastle Knights Facing the Toughest Challenge: Rebuilding the Team Undermining A Great Sport To Satisfy The Needs Of A Few