NFL 2021/2022 Predictions: Five Teams with the Potential for Best Offense 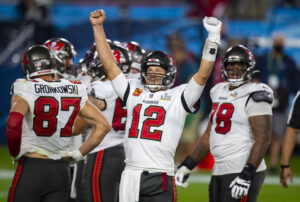 The reconstruction of most NFL roster adjustments is now behind us. The schedule has been released, and yes, we are just four months away from the return of our beloved game. Win-share projections are rarely precise in their anticipated results, but the utilization in this method can give us a foregone conclusion that is more trustworthy than human judgement. These projections could dramatically change based on the quarterback performance. And although you may not see your favourite or predicted best offense in our top-five list, predictions based on average results can be heavily volatile and should be taken lightly.

#5 Buffalo Bills
When balanced with their defence, the Bills offence ranking has taken a hit in win share at 5.1 for defence and special teams, we have 11.1 victories projected for the Buffalo Bills for this reason. The Bills should be playoff bound based on these projections and should finish with the second-best overall win total in the AFC.

The Bills should remain a top five team in passing yards per attempt after ranking fourth last season at 7.8. They should also finish as a top three team in third-down conversations after finishing first last year. Now, with improvements to the Bills defence, Brian Daboll should look for a very proactive offensive game plan, planning could involve a control of pace with more focus on the ground game. The arrival of Matt Breida alongside six backs on the roster indicates a sight set on this area.

#4 Dallas Cowboys
The Dallas Cowboys are quite unbalanced, a win-share projection of 2.87 on defence/special teams and 6.03 on offense is evidence of this. The return of Dak Prescott returning from injury puts the Cowboys at risk in the backup quarterback position (Garrett Gilbert & Cooper Rush). To add, there are problems with the offensive line, Zack Martin projects to be the second best-rated guard and the line in general falls outside of my personal top eight prior to camp. 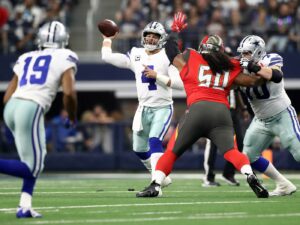 #3 Green Bay Packers
This projection is dependent on Aaron Rodgers future with Green Bay. The recent talk regarding A-Rod’s value made us look towards special attributes and data collection surrounding the leagues MVP that are not regularly highlighted.
Mr Rodgers holds a scary pace. Attempting to predict the time between plays with Rodgers is extremely difficult even for the Best Online Sportsbooks. Most teams have obvious reads with pace, especially when looking at two-minute offenses and the red zone, which are often important areas. If a defensive line gets a basic three seconds to understand your tactic based on what is happening before the play starts, the advantage is there’s.

A-Rod also does incredible work of resetting to throw when he is on the run. When a quarterback gets set after running, Rodgers owns the third-best rating throughout the league during the previous five seasons (54.3%); he has the best passer rating on said throws in the same time period (111.3).

#2 Kansas City Chiefs
The Kansas City Chiefs are fresh from a rebuilt O-line and they own fourteen WRs on the depth chart, which adds more uncertainty at this position. Due to this, the Bucs will remain as the #1 projected offense. Mahomes, Hill, and Kelce combined are the highest QB, WR, and TE win-share triple in the entire division. Since the departure of S. Watkins, Mecole Hardman & Demarcus Robinson will own a bigger role this coming season and both men had a worse 2020 season than 2019. With that said, the lack of coverage could be fulfilled with the new offensive line that can give Mahomes more time to engage. 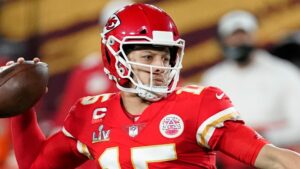 1# Tampa Bay Buccaneers
The reigning Super Bowl Champions have a projected win total of 12.2, offense and defence both sit with a minimum of 5.9 projected wins. Balanced teams from the previous five seasons where the concluding win-total attributes at the end of the season did not surpass 0.4 wins (in offense and defence), whilst winning at least eight games; every single team made it past the Wild Card Weekend. Specifically, none of them ranked #1 on both sides of the ball in win share. The Bucs will head into the season with all 22 starters from last seasons championship team, own the best win-share projection on offense and are the third-best on defence.