England played well in the first half while New Zealand just didn’t look themselves. The loss of Frank Pritchard to injury was a big blow to the New Zealand pack and England came out breathing fire. Gareth Widdop played very well in his return to the English lineup as a starter, something that left many English fans wondering why he had been held back until so late in the tournament.

Sam Burgess in particular was great in the first half. He really set a good platform for England and helped them skip away to an early 8-0 lead. The Kiwi’s managed to fight their way back into the match however and tied the game up at 8-all going into the half time break.

The first half was punctuated by a brilliant try by New Zealand. The ball went from one side of the field to the other, and then, Dean Whare added this piece of magic to the contest:

The second half was a similar affair with New Zealand looking slightly off their game while England looked to stick to the basics.

Both teams had their chances in a contest that went back and forth. Just when it looked like New Zealand were going to kick on and get an easy win, England would come fighting back and take the lead once more.

One crucial moment in the match saw New Zealand attacking the English line. As the ball went out to the right hand side New Zealand looked certain to score. English winger Ryan Hall took what looked to be a great intercept, but dropped it cold almost immediately. In the context of the moment, and with the game on a knife edge, a run away intercept try could very well have seen a different result in this game.

A missed conversion by Kevin Sinfield left the door open for the New Zealand comeback. Sinfields kicking game late was very poor. As England needed to shut down the match, slow the game down and make New Zealand work the ball out from their own half of the field, Sinfield kept kicking the ball straight down the throat of Kevin Locke instead of looking for touch. It allowed New Zealand to keep their momentum and kept England on the back foot late in the match.

Then, the crucial moments…

A high tackle on Sonny Bill Williams by George Burgess allowed New Zealand brilliant field position with just a minute left on the clock. Down 14-18, a try was the only result New Zealand could go for.

On the English line the Kiwi’s got close to the line but couldn’t break it. Then, a long pass out to the left hand side saw Kevin Sinfield run out of the defensive line at New Zealand halfback Shaun Johnson. Johnson put a step on Sinfield, accelerated through the hole in the defense he had left, and score the most important and memorable try of his career to level the scores up at 18-all. 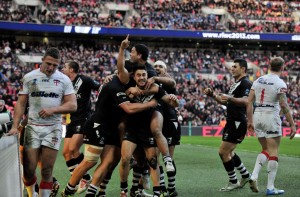 It was all left to Johnson once again to nail the relatively easy conversion and book New Zealand’s place in the final at Old Trafford.

A few thoughts coming out of this contest…

New Zealand looked like a team that has not played a close game in some time. Their softer run through the World Cup could have easily come back to bite them.

New Zealand didn’t play smart in defense. They kept biting hard on decoy runners and it allowed England to find them short on the edges. Australia will have taken note of this and I would expect that next weekend the Kangaroo’s will throw a thousand decoy runners at the Kiwi’s and hoping for similar results.

Sam Burgess was named Man of the Match, once again about 7 minutes before full time, although I felt that once again Issac Luke was sensational in this game. Late in the contest he was the difference between both teams. Both Luke and Greg Inglis have been the standout players at this World Cup. Its daylight after those two.

The Kiwi’s need to improve heading into the final, but I am still tipping them to win it all.

England put so much into this match and the World Cup in general. While they played well, I don’t think we will see England build on this result. When you consider that the next World Cup will be held in Australia and New Zealand, and that England haven’t turned up for a contest down under in a generation, its safe to say the the next time England consider themselves to be any hope of even being competitive in a World Cup will be with a very different looking lineup.

This is surely the end of Kevin Sinfields international career. He was poor throughout the World Cup, at times he was nothing short of a liability, and with his advanced age and his complete collapse in the dying moments of this contest, it is time for England to do the right thing and tap him on the shoulder.

I’ll write more about Englands over all effort in the World Cup but needless to say it didn’t work out the way the RFL intended.

So, New Zealand are into the final, they will face Australia. It will be another epic World Cup final!

Australia Destroys Fiji in World Cup Semi Final What Shall We Do With The London Broncos?