First Visit To Bankwest Stadium, What An Amazing Venue For Rugby League!

Yesterday I took my first trip to Bankwest Stadium in Parramatta to call the NSWRL Junior Rep Grand Finals as part of the SWR Sports Rugby League call team.

I haven’t been to Parramatta Stadium in many years. I use to go there all the time as a teenager as most of my friends were Eels supporters, something I payed out on them about. So it was amazing to drive up to the stadium and see the amazing structure that stood in the place of the old Parramatta Stadium, even from the outside Bankwest Stadium is impressive.

As part of the game day media (The dark side!) I was lucky enough to have a pass to park around in the carpark around the western side of the stadium. I’d spent many hours there looking for player autographs as a young kid, so I found that pretty cool. I received a wristband that allowed me media access to the stadium and was met by my good mate and SWR Sports head caller Daniel Pettigrew who is the reason I was there in the first place, and taken into the stadium.

Heading into the media section of the stadium was more like entering an office building. It is all closed off the from viewing areas themselves. All very modern and new obviously, and for a first time visitor a little confusing to get around.

You go up an elevator and walk down a very long hallway that almost goes the entire length of the stand, and off to the right are the doors to all of the different media, coaches and officials boxes…all closed off and once again more like an office than an obvious stadium.

We headed into the SWR Sports calling box and….wow….this was the view we had…. 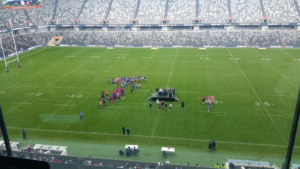 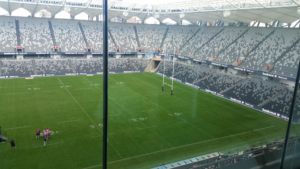 I turned up just in time to see the Illawarra Steelers win the Tarsha Gale Cup. Before it was time to call the Harold Matthews Cup I managed to get a quick look at the view from the concourse area.

I took this photo from the area where the wheelchair viewing was from. I noticed wheel chair viewing was right around the concourse area of the stadium, easy to get to, plenty of room to move around, and check out the view that’s available! 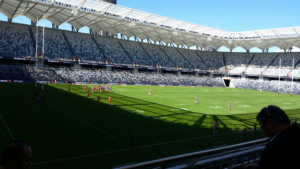 I also got a bit of a closer look at the stand at the end of the ground from the same area. 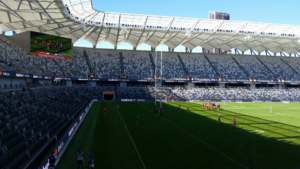 After a quick look at the concourse area it was off to call the Harold Matthew Cup. The main caller for the game was Jack Clifton who did a terrific job calling what was a great match! I was the “second caller” with Thomas working alongside me doing the same thing. It was a great team to work with.

I can tell you right now, I don’t know how the main callers get the job done. Keeping up with all the player names at an instant is a real skill. They refer to their notes every few seconds while calling what is happening on the field, they keep giving score and time updates, keep track of scorers while also coordinating the whole call team. I couldn’t do it!

My job as a second caller was basically to call what I was seeing each team do on a bit of a longer time scale. The main caller is doing plays second by second. I see my role more of to give a bit more of an overview of what is happening over a whole set or two.

There are areas of my role that I think about improving. Things such as keeping track of what is happening in back play, things the main commentator can’t keep an eye on as they are too busy calling the action as it happens, and trying to give a bit of a “feel” for what is happening while also taking a bit of pressure of the main commentator and giving him a break. It is also a skill you have to learn. It is a heck of a lot of fun though and not really too much work at all. It is just interesting to think about what I’m doing and trying to learn as I go.

The game we called was terrific. The Newcastle Knights, who had been the best team all season, took out the title with a brilliant 28-8 win over the Canterbury Bulldogs.

I stuck around after the match to watch the SG Ball Grand Final and took a bit of a wander around the stadium once again.

There is very little access to the main arena from the commentary area. There is one door however that leads out to the area where the television cameras set up. So I headed out that way, which is right next to the corporate boxes and took this photo from there. 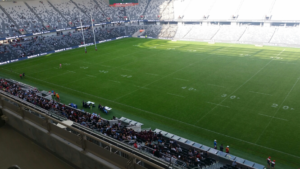 This is a bit of a view from the same area with the Steelers in great field position. You can see the steep seating arrangements really well in this photo. 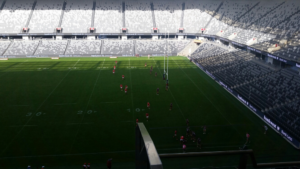 I went back to the commentary box soon after I took this photo, I jumped on towards the end of the broadcast to promote the Fergo and The Freak podcast, and that was that!

Overall I really enjoyed the day, it was great meeting a lot of new people, and the stadium was just amazing.

Seriously, if you haven’t been to an event at Bankwest Stadium, make sure you make the effort to get there. It is a better viewing experience than you can even imagine. It is the best stadium I have ever been to, and after watching a number of fantastic games over the afternoon, I can tell you I’ll be heading back there to watch as many games as I can!

Does The Mainstream Media Have Any Idea What NRL Supporters Are Interested In? Podcast: Fergo And The Freak - Episode 13