Daniel Nichols – Robert Lui Allowed To Play In Women In League Round – What A Joke!!!

I’ve thought about writing this Saturday Night but it was not until now that I decided to go ahead due to the sensitive nature of the topic.

Last weekend the NRL put on its Women In League round. Teams wore pink, charities were given much needed publicity and thousands upon thousands of dollars were raised for an amazing cause.

This is one week where the NRL can truly be proud of their part in the community as they celebrate everything good that women contribute to the game we all love.

It was not until Saturday Night that I saw something that made me sick to my stomach. No it wasn’t the effort of the Warriors against the Panthers, it was, well … this: 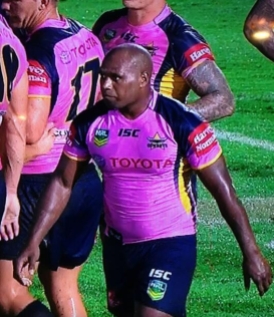 The sight of serial offender Robert Lui representing the Cowboys in the Women In League round was downright disgusting.

Now this isn’t an individual who has been accused of doing something. This is not a man who we all believe has done wrong. This is a man who has faced court and has admitted and been convicted of a heinous act you would not wish upon your worst of enemies.

This is a man who has admitted and been convicted (very important to state this again) of attacking his pregnant partner … Of course this came a year almost to the day after he was accused of beating his partner.

For the purpose of this article I will refer only to the second incident as he was convicted in a court of law whereas in the first case charges were dismissed.

According to his admission Lui head-butted and kicked his pregnant girl-friend as she lay on the floor. This is an act of assault at any time, let alone the fact it was on a defenseless pregnant woman, whom Lui supposedly loved.

What does disgust me is that Robert Lui was allowed to wear a pink Women In League jersey representing both his club and the NRL. Whoever made that decision both at NRL and club level should be asked a very simple question … “What The Hell Is Wrong With You!?”

Lui had NO right to represent the Cowboys in such an important round of football after his actions. Now I know he was not the only man who had a history of violence against women who played in the WIL round but he is the only one to be convicted and suspended for his act of cowardice.

The NRL should have stood by its supposed tough stance on violence against women and told the Cowboys in no uncertain terms that Lui is NOT to represent the game during the WIL round.

Cowboys’ officials should have also realised the significance of the round and sent Lui off to play reserve grade. Sure it was an important game against the Roosters but you tell that to a victim of domestic abuse and I bet she doesn’t feel any better about the situation.

The Cowboys should be issued a “please explain” as to why Lui was allowed to play. Surely someone in the club, knowing of Lui’s past, would have had the sense to suggest “hey guys, let’s give Lui a run in the QLD cup to save face” …

I cannot stress enough just how sick people who hit women make me and I am sure (I hope) that I am not alone.

The fact Lui was allowed to return to such a public arena after his actions don’t sit well with me but I fully understand that he has done his time and should be allowed to earn a living, if for nothing else than to support his partner and child.

The fact he was allowed to play in a round of football that was specifically targeted to recognize the important role women play in making Rugby League the game we all know and love, is downright disgusting and should NEVER have been allowed to happen.