Any international sporting competition is incomplete unless it has one very important element….mascots!

Personally I don’t even watch an international sporting competition unless I have been marketed a mascot that I can buy in various forms.

I like to think back over the history of sporting mascots…they really do complete the entire sporting experience!

So I give you the official mascots of the 2013 Rugby League World Cup, Grubber and Steed: 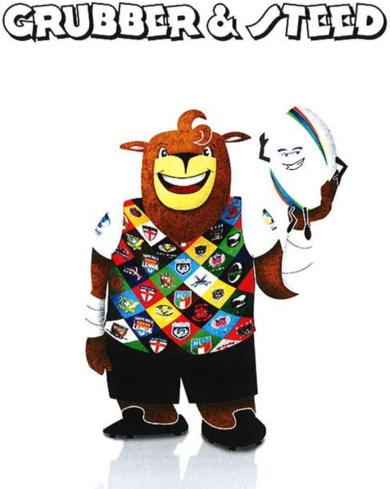 Organizers of the 2013 Rugby League World Cup describe both mascots this way:

“Grubber is a large bear character called. He has a cheeky Rugby League ball shaped side-kick called Steed. Grubber wears a shirt which has the logos of the 14 competing nations on and will be there cheering on every team during the tournament.”

1,000 kids entered into a competition to help come up with these mascots. Eventually three youngsters were chosen to add their influence to Grubber and Steed. They were Emily Sixsmith, Luke James and Sam Bithell.