There is something to be said about getting the picture of another mans face tattooed on your thigh. It shows a level commitment and dedication to questionable decisions that not everyone has the ability to carry through the course of their entire life.

That is where Josh Dugan is different to you and I…

Josh Dugan is only 22 years old and you have to take that into account sometimes Sure he has made some mistakes, but he is young and free and living his life the best way he knows how.

It turns out that Dugan is such a big fan of Baltimore Ravens linebacker Ray Lewis that he recently got a tattoo of his face right next to his own junk: 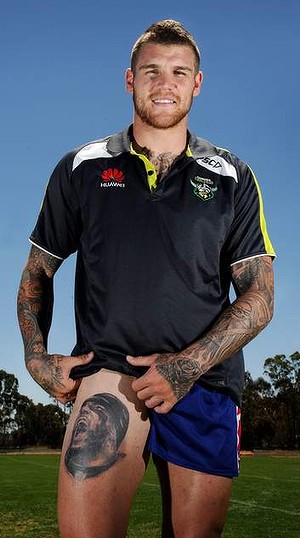 Take a look at that beauty! There is nothing weird about that at all! Nothing!

Ray Lewis, who earlier in his career had a murder charge hanging over his head and who recently had to contend with accusations that he used Deer Antler extract to get over an injury, something that is not allowed under the NFL’s drugs policy, was part of the Baltimore Ravens Superbowl winning team earlier today. He seems as good of an athlete as any other to look up to…right?

Dugan cleared all that up when he spoke to Jon Tuxworth of the Canberra Times when he said “If people knew the real story … it happened 12 years ago as well, and he was found not guilty then, and no doubt he’ll be found not guilty again this year”. Thanks for clearing that one up Josh!

The best part of all of this is the comments carried on a web site called Barstool Sports that carried this picture of Dugan sporting his new ink: 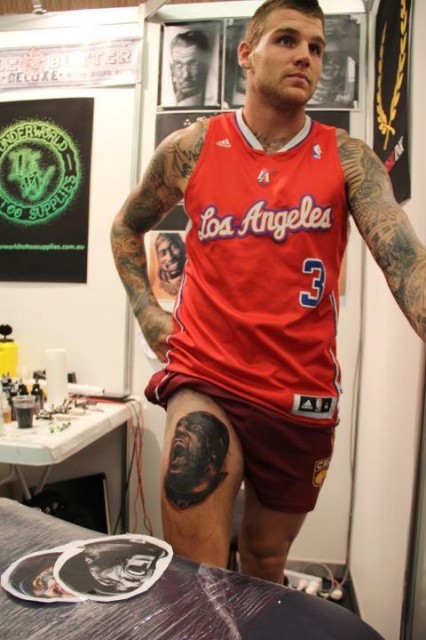 Sporting his Country Rugby League shorts, his LA Clippers jersey and showing off his new tat, Dugan was savaged with some hilarious comments that I highly recommend you read HERE.

Why anyone would want a tattoo of Ray Lewis on themselves is beyond me. When they would want it on their upper thigh is just weird.

The law of averages say that at some point, Ray Lewis is going to get a load blasted on his face!

How Likely Is It That Sam Tomkins Will Ever Play In The NRL? David Furner Should Concentrate On Not Fucking It All Up Again