UPDATE: So this news was broken by Ben Dobbin of Triple M in Brisbane. It turns out he was wrong… 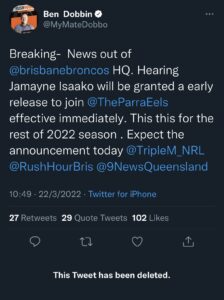 More Drama . Jamayne Isaako is not going to the parramatta eels he has done a deal @GCTitans to stay in qld . Both clubs chased and he has just informed them he wants to stay in qld

So Jamayne Isaako was never going to the Parramatta Eels and was ALWAYS going to sign immediately for the Gold Coast Titans.

I’m sorry I got sucked into this like the rest of you.

Its an interesting move by the Titans. They have Campbell and Brimson on their books. Signing Isaako as a winger is a bit of a strange one but we may see him moved to centre. I guess we will find out!

The New Zealand Warriors One Step Closer To Returning Home NRL Podcast: Fergo and The Freak - Ep386 - A Broom Through The Tigers And A Dozer Through Canberra