Ah the Golden Boot award, the most ridiculed, laughed at award in all of Rugby League. An award that’s credibility has been completely trashed by stupid selections over many years that have no real connection to what is going on in the game.

The newly named International Rugby League has shown off the award, one that took over for no real reason at all.

Here is a photo of the new award. 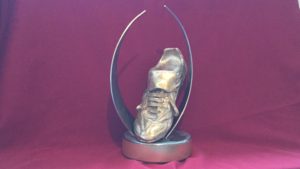 I’ve written many times about this ridiculous award. The way it has been changed and become a moving target that is used by English League types to pretend that many of their players are actually relevant in the wider sport.