The George Hotel And The Rugby League Heritage Centre 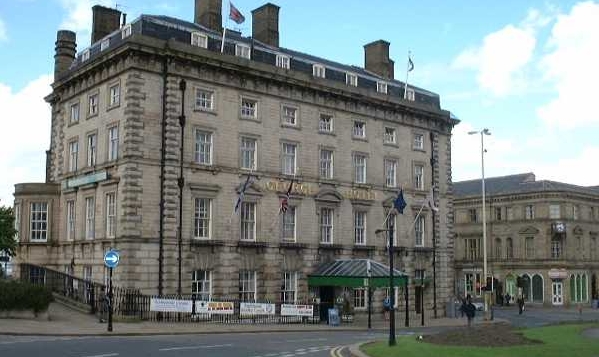 The Official Birthplace Of The Game Of Rugby League
On 29 August 1895 twenty-one clubs met at The George Hotel in Huddersfield and formed the Northern Rugby Union (later to become known as Rugby League). The clubs and their year of foundation were:

Everything you could imagine from old trophies, photos, jerseys, medals, even things like players contracts can be seen at the center. It is a must see for any Rugby League fan.

League Freaks Visit And Thoughts On The Center
Thursday afternoon and League Freak finds himself in the birthplace of Rugby League.

The George Hotel in Huddersfield is where the games founding members decided to break away from the RFU and embrace professionalism.

As I entered the Hotel I had no idea what to expect. Going to reception, I asked where the Heritage Center was and was directed down some stairs.

The Stairway is lined with pictures of great Rugby League players and new articles of famous moments in the game.

You enter a room below the hotel and it hits you, the history of the game played out on the walls around you.

Following the great story of Rugby League, you follow the history of the game around the room, from the meeting at the George Hotel, to the New Zealand All Golds Tour in 1907 and all the way up to modern day achievements and moments in the games history.

Around the room are pieces of memorabilia.

Sean Edwards Challenge Cup winners medals are on display as are the 2004 Tri Nations trophy and one of the versions of the Rugby League World Cup.

Old jerseys, player contracts, game logs and test caps…I was there for about 2 and a half hours just looking through everything there.

The Heritage Center is sponsored by Gillette and backed by Mike Stephenson.

On the day the Heritage Center was being attended to by Assistant Manager Keith Burhouse. Keith works at the Heritage Center for free and does a brilliant job of managing and maintaining the Center as well as showing visitors around. We talked for hours about the great players, clubs and moments in the game.

We both share a passion for history and as we talked I realized that with people like him involved in the Un-Earthing of Rugby League history, the game and its past will never be forgotten.

We talked about the good and bad points in the game history. The problems the Center has in regards to gaining funding and prying items of historical value from clubs and the RFL.

A visit to the Rugby League Heritage Center is a MUST for ANY Rugby League fan. It was a trip I will never forget as long as I live.

BBC Bradford and West YorkshireA 360 Degree View Of The Founders Room
A 360 degree view of the room in which Rugby League was formed back in 1895.